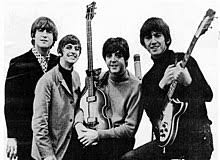 “A Taste of Honey” written by Bobby Scott and Ric Marlow based on the play of the same name by Shelagh Delaney and adapted from the theme song of the movie in 1961. This one I always though to be an original song though the character of the tune speaks otherwise so I should have caught on sooner.  It was originally recorded as a vocal track by Billy Dee Williams (yes that one from Star Wars) in 1961, though I can find no clips of it. Here are the Beatles; this song has been recorded as a vocal track and instrumental 174 times.
From “Please Please Me” once again on March 22, 1963
https://www.youtube.com/watch?v=rHxeKnEl8zY
Barbara Streisand recorded February 25, 1963 it just before the Beatles did theirs.
https://www.youtube.com/watch?v=SZgdRHQBR90
The Indie band “The Shins” recorded it in 2017
https://www.youtube.com/watch?v=Q1OtUEW5780

Yesterday (Sept. 26) was the 50th Anniversary of Abbey Road, the Beatles last recording session together and the second last album before Let it Be was issued May 8, 1970. And also Happy belated One Hit Wonder Day! (Sept. 25th) so I thought it would make a good blog topic.


The simplest definition I found is from music journalist Wayne Jancik "an act that has won a position on a national, pop, Top 40 record chart just once." This from the 'The Billboard Book of One-Hit Wonders' (1998). So we aren't talking one #1 hit. It's not a term I like as it implies (and some truth to that) these artists have had just a brief moment in the spotlight, perhaps undeservedly so and then fallen off the music map. I know other and deeper definitions are a bit more broad and go beyond the absolute single hit idea. They also consider many artists that have still maintained a quality career and just not reproduced another 'top 40 hit' song and or ma…
Post a Comment
Read more


What exactly I am about to attempt to demonstrate I confess I'm not 100% certain, but what I do know is that there has been a bit of a downward sliding scale regarding the enduring quality of mainstream Country Music songs. Apologies in advance for rambling and ranting at various points. This is not a history of Country Music but my opinion on the current state of things in general with the genre.

It's murky waters that I'm swimming in here as there is an evolution involved in any music genre so direct comparisons are perhaps inappropriate. I am somewhat aware of the influence the so called Country Music "establishment" has had on this evolution. One need only look at examples like Taylor Swift, Shania Twain and Garth Brooks and others who were criticized and in some cases "shunned" for their unconventional approaches who are now celebrated as part of that same 'establishment'. So there is some hypocrisy at play in my op…
Post a Comment
Read more

Arthur Conley co-wrote this song with Otis Redding and it's a tribute to some of the early greats of Soul Music. The song's melody (and words for that matter) borrowed heavily from the Sam Cooke song "Yeah Man" and a subsequent lawsuit brought by A.W. Alexander who managed Cooke's songs after his untimely death added his name to the song credits. The resulting song however was a huge hit for Conley and it reached #2 on Billboard's Hot 100 and R&B Chart in 1967 and #7 in the UK where Soul Music was gaining popularity particularly amongst a subset of British youth. The lyrics reference the co-writer Otis Redding, James Brown and songs by The Miracles, Lou Rawls, Sam & Dave and Wilson Pickett, some of the key figures in early Soul Music. "Sweet Soul Music" covered 30 times, The Jam (1977).

Soul music is a fusion of R&B, Gospel and Jazz. Know generally for it's more upbeat tempo it's fun to listen to and great for d…
Post a Comment
Read more

I have talked about this frequently throughout my posts but more particularly in the series on the Delta Blues and the History of R&R parts 1-4. Truth be told, most of the greatests 'Rock' artists owe much of their inspiration to the Blues. Rock bands and solo artists have cut many sides early and throughout their careers of blues songs. Thanks to artists like Chuck Berry and Elvis Presley who were obviously very well known and successful, their covers of some of the great blues songs served as a conduit and exposed them to artists and listeners alike. Here are some 'Blues' that inspired Rock artists, a few of these songs are more well known than others.


Confessin' the Blues by The Rolling Stones was recorded  June 11, 1964 and released on a 7" record of five songs on August 14. Written by Walter Brown (vocals) and Jay McShann (piano and bandleader) originally released in June of 1941. Covered about 35 times including Chuck Berr…
1 comment
Read more

Ok here is the last of my list, I could go on and as a matter of fact I will, just not with another set of 25 plus "to infinity and beyond!" I have to say it was easy to come up with more songs as this final list started at 43. But it was very difficult to decide which ones would make the final cut, so these last 25 songs became a list with a number of great ones left for another day.


76. "Flip Flop and Fly" is a song by the same collection that brought us the classic "Shake Rattle and Roll" written by Jesse Stone (credited to his pseudonym Charles E. Calhoun) and Lou Willie Turner, sung by Big Joe Turner (1955). The first time I heard this was at a club in my hometown I'll say around 1979 or so, performed by the talented Canadian Blues band Downchild Blues Band, later known as just 'Downchild'. Still the best cover for me although I've heard many fine ones out of some over 70 versions, this is a standa…
Post a Comment
Read more

There has been a very positive response to the first two 'Greatest' posts. So the list continues and the songs become no less in their timeless quality compared to numbers one through fifty. I will post a #76-100 edition in the near future and that will be out of my system. But what if I do lists by genre, just thinking out loud, sorry but I will keep blogging on various topics as long as people continue to click.

51. "I Put a Spell on You" written and originally recorded by Screamin' Jay Hawkins in 1956. There have been many really good covers of this song but Nina Simone (1965) was just the second person to cover this song. I just can't get over how overlooked this artist was in her time, a high class version that turns the song on it's ear to give it an entirely different sound.


52. "Strange Fruit" was a courageous recording by the legendary Billie Holliday from 1939. A song written as a poem by another …
Post a Comment
Read more

When talking about the band I have to confess I'm out of my depth so I will tread lightly. We should however get right to their beginnings and major influence, that being the 'Talking Heads' and their namesake song "Radio Head". The band had been called 'On a Friday' but their record label requested they change it before signing a contract (with EMI records) in 1991.
Radiohead are one of the most successful and influential Rock bands since their debut album "Pablo Honey' (Jerky Boys) in February of 1993. All their songs are credited to the entire band Colin Greenwood, Jonny Greenwood, Ed O'Brien, Phil Selway and Thom Yorke. And there's the 'sixth member' producer Nigel Godrich who's done all their albums since 1994. Their song "Creep" charted top 40 across the world and it's depressing tone eventually wore the band down to the point they stopped playing it live for a long period of time. The songs melo…
Post a Comment
Read more

Music Myths and other Silly Things

Who doesn't like a good story? There are many great ones and some not so much about music. I try and put a little story into my blogs and during the course of my research I have run across some that are quite curious. Some of these myths about songs and artists have innocent enough beginnings and been perpetuated or at least not denied by the artists themselves, others come from malcontents and the misinformed.

Here is one that falls in the category of a silly thing; Bob Dylan and the 'Stealers Wheel' song "Stuck in the Middle with You", released in April, 1973.

1. Bob Dylan did not write this nor did he sing this song, nor is this song about Bob Dylan.

Nothing quite grabs the attention more than a list of the greatest this or that, so at 85 posts about cover songs I thought it about time to get to it. As I advised with my other 'Greatest' posts we all have our favorites so anytime there is a list, something or someone 'great' gets left off. And the debate ensues, why is this and that at #11 not #4 and vise versa. My list therefore, shall be no different for it is not scientific but subjective and it is biased by my own tastes and exposure to music. Having said that it's hard for me to have missed many of the truly great cover songs of all time, indeed I think I've talked about quite a few:


"Respect" from the writer and original recording Otis Redding and a cover she made her own, the Queen of Soul Aretha Franklin. More about the song and Aretha in these posts. Before I get to some cover's I've not mentioned, here are more songs from my previous issues that are …
1 comment
Read more

In part one I listed 25 of the greatest cover songs and to date it's been my most viewed blog post. There are so many more I wanted to add to the list so depending on the response, I'm prepared to follow with 51-75 and 76-100 in the future.

This list in part comes from many of the songs that I have already posted in the past 15 months or so since I started blogging. As for how songs make it on my list there are a few criteria, while I don't dismiss music from more recent years a song has to have stood the test of time for me, hence much of the list are songs of some vintage and just plain old, like the writer. Next, the original song itself must have some character and some degree of popularity. And preferably the artist and or songwriters are of interest as well. I have read other lists of great cover songs from books, articles and google searches and you'll find much similarity, but some of them contain songs I just don…
Post a Comment
Read more