Dock Boggs and ‘O Brother, Where Art Thou?’ 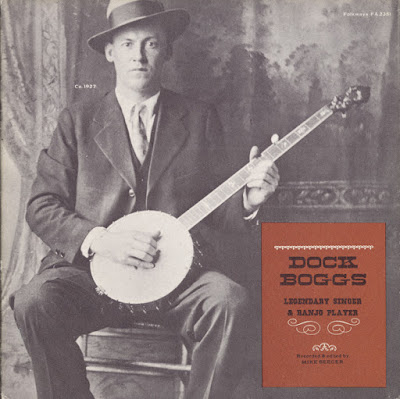 Moran Lee "Dock" Boggs (February 7, 1898 – February 7, 1971), was a banjo player and singer, his style is considered a unique combination of Appalachian folk music and African-American blues. Growing up his influences include an African American itinerant musician named ‘Go Lightning’ and another banjo player named Homer Crawford. His playing method was an “up pick style”, Mike Seeger said he’d seen no other recorded artist use this way of playing. Two of his recordings from the 1920s, "Sugar Baby" and "Country Blues" have been quite influential to many folk singers. As with many of these artists during the depression, work was hard to find. He soon returned to coal mining and a few other jobs over the years. The aforementioned Mike Seeger (half brother to Pete Seeger) a singer, musician and folklorist tracked Dock down in 1963 and encouraged him start to play again, he spent the next several years recording and playing the folk music circuit including the famed Newport Music Festival.

Kelly Joe Phelps live at Freight & Salvage - Berkeley, CA on February 1st, 2009
John Renbourn, 1971 (who also plays a favorite of mine, a fingerstyle guitar piece-linked below). The Chieftains with Buddy & Julie Miller, 2002

John Renbourn, “Bouree I and II”

“Oh Death” by Pace Jubilee Singers, 1927. The first recording I can find about a song that pleads for another year of life, the writer of the song is listed as ‘Traditional’. Dock Boggs is, as far as I can tell the first one known to ‘cover’ this and there is no evidence I can find that Dock would be aware this song had ever been recorded before this in 1964. He likely ran across this song from hearing someone else play it and it's is somewhat self evident upon listening that he’d been doing this song for many years.

“Oh Death” Ralph Stanley (2000) from the ‘O Brother, Where Art Thou?’ Soundtrack. Ralph Staley won a Grammy in 2002 for this song. While Stanley is an accomplished singer and banjo player for certain and well deserving, I can’t help but see the influence of the Dock Boggs version. I just wonder in this case if not for Dock would this song have ever made it this far?

While this song is listed as ‘Traditional’ for the writing credit, there is an assertion from the family of Lloyd Chandler that "O, Death" is Chandler's song "A Conversation with Death", which he performed for several years while preaching in Appalachia. Dock says he learned it from his brother-in-law, Lee Hansucker. What is clear that this song was widely sung in the Appalachian region for many years by many singers until it found its way to fame in the movie. Also, quite evident from my reading that people like Dock Boggs had an influence on many artists from the likes of Jefferson Airplane and the Byrds to Bob Dylan and The Band. The fact that his banjo playing had an affect on guitar players like the amazing John Fahey who would produce a recording of Dock in the 1960’s on his Revenant label explains Dock's enduring legacy.

“Sugar Baby”  by Dock Boggs recorded in 1927. (Traditional) This is the first known recording of this song. The remarkable sisters from Montreal, Kate & Anna McGarrigle (Kate McGarrigle was married to singer-songwriter Loudon Wainwright III, their children are Rufus and Martha). "Sugar Baby ( Who'll Rock The Cradle)" you will notice the "sugar baby" more in the second half.

Bob Dylan recorded a different song of the same name as this was a favorite of his as a child. A song sung widely in the Appalachia and on the folk music scene but rarely recorded.