For this edition I'm looking to the women of Country Music for some inspiration, and there are plenty of great covers to choose from over the years.
Here is a notable song to start with, a rarity in that it's the first country female artist to have a million seller (1935). She wrote the song while missing her then boyfriend in 1934, the melody is based on the great Stuart Hamblen's tune "Texas Plains". 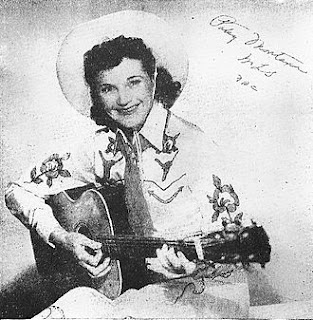 Next we have a song many women may be able to relate too ;)
"Don't Come Home A'Drinkin' (With Lovin' on Your Mind)" by Loretta Lynn, written by Loretta Lynn and her sister Peggy Sue Wright. First recorded in 1966, covered just 10 times. Gretchen Wilson from the 'Coal Miner's Daughter' soundtrack (2010), Terri Clark (2012).

"Independence Day" (1993) by Martina McBride, written by the prolific Gretchen Peters. Often mistaken for a song about U.S. Patriotism it is a song about domestic abuse.  Carrie Underwood (2005).

"Fancy" by Bobbie Gentry (1969), written by Bobbie Gentry who has been quoted as saying this, "Fancy is my strongest statement for women's lib, if you really listen to it. I agree wholeheartedly with that movement and all the serious issues that they stand for-equality, equal pay, day care centers, and abortion rights." Covered 11 times. Reba McEntire (1990).

"Harper Valley P.T.A." ironically written by a man (and country legend) Tom T. Hall, it's another strong statement from a women through song. One that I thought was a Jeannie C. Riley (1968) original (who made it famous) but first recorded by Margie Singleton (1968). Dolly Parton (1969), Kelly Willis & Bruce Robison (2014).

"Stay" by Sugarland, performed and written by Jennifer Nettles is a very poignant song. Kristen Merlin from The Voice in 2014.

"Crazy" is another song written by a man and another country music legend Willie Nelson, however the version that was the biggest hit reaching #2 in 1961 was the original by Patsy Cline. Hard to match Patsy Cline but here is an amazing cover by Linda Ronstadt (1976).

What can one say about such an amazing voice singing one of the best songs ever written? Nothing more as the song speaks for itself. The next person to record this song was none other than the man himself, Willie Nelson (1961)

I will finish this issue with one of my personal favorite country cover songs, "Angel from Montgomery" written and first performed by John Prine (1972).
Covered first and most famously by Bonnie Raitt in 1974. Susan Tedeschi (1998) and an amazing version it is! The song is written from the standpoint of an older woman just looking for an 'angel' to take her away to a better life, a sad yet beautiful song.

Playlist of all the videos.


Music Trivia Question! Who is the most prolific and successful female Country singer/songwriter of all time? She has over 5,000 songs to her credit, 26 #1 Country hit songs and 9 Grammys, 10 American Country Music Awards and 42 top ten Country Albums. Put your guess in the comments section and no cheating! Only I get to look this stuff up! Answer in the next issue 😁

If you like my blog, please consider clicking the ‘Subscribe’ button at the top of the home page. Remember to confirm the subscription when you get the first email. Pass it along to a friend who might enjoy it as well! And many thanks as always for reading my blog! Thanks Darren as always for your suggestions.