As defined in a google search; croon·er, noun. a singer, typically a male one, who sings sentimental songs in a soft, low voice.


I've read most singers we might put into this category don't or didn't identify with the classification and even today some feel the term is somewhat pejorative. That said I may actually be able to find one song like "As Time Goes By" and list a cover version from just about every crooner in history, but I won't do that to you today. However as it happens that song was written by Herman Hupfeld in 1931 and was used in the Broadway musical 'Everybody's Welcome' performed by Frances Williams. First recorded by one of the original crooners Rudy Vallée in July of that same year. If you are a movie buff you will recognize the song from Casablanca (1942), sung by Sam (Dooley Wilson), later released as a record in 1943. Covered over 430 times.

Chronologically here is a list of Crooners from another well researched blog https://jackscohen.wordpress.com/2018/10/11/crooners/.

While not the exclusive domain of the male singer I will follow with the traditional classification and deal predominately with the 'followers' of the Al Jolson, Rudy Vallee and Al Bowlly style. Truth be told there are a lot of 'greats' but the ultimate king of the crooners is Frank Sinatra. He has performed over 100 original songs that have been covered and over 600 songs that he has covered. I've already referenced Frank a dozen times but still it's tough picking songs as there are so many exceptional ones. As I pointed out in the Paul Anka post, 'My Way" is technically a cover as the music is from another song, the new lyrics written by Anka were specifically for Sinatra. If I focus on his original songs and look to Secondhandsongs.com the most covered at 286 (vocal and instrumental) versions is "Polka Dots and Moonbeams" (1940) by Tommy Dorsey and His Orchestra - Vocal refrain by Frank Sinatra. As was the style back then, the Orchestra and Band Leader were the feature, the vocalist chiming in later in the song was secondary. Covered by another crooner, the 'Velvet Fog' Mel Tormé (1955), also Cassandra Wilson (1988), Micheller Myrtill & Pintér Tibor (2011) and yes believe it or not Bob Dylan.

The next most covered song at 285 versions is "I Fall in Love Too Easily" (1945) from the movie 'Anchors Aweigh', written by Sammy Cahn and Jule Styne. Covered first by the amazing Chet Baker (1954) check out his biopic Born to be Blue starring Ethan Hawke. The under appreciated Sammy Davis Jr. (1960), Matt Dusk (2013).

One more Frank song, at 272 covers is "In the Wee Small Hours of the Morning" (1955) written by David Mann and Bob Hilliard. Cover by another fine crooner Andy Williams (1959). 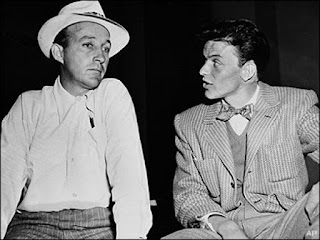 Bing Crosby for some is the the finest of male voices, and hard to argue with such an amazing career. With numbers to rival Sinatra at 94 originals and 542 cover songs. However when it comes to the holidays it's hard to beat "White Christmas" written by Irving Berlin for the 1942 movie 'Holiday Inn' at over 1300 covers and "I'll be Home for Christmas" (1943) written by Kim Gannon, Walter Kent and Buck Ram with over 800 versions. I defy you to find a more beautiful song than the Cole Porter classic "True Love" from the movie High Society (1956) performed with Grace Kelly. Cover by Elvis (1957).