Rocketman, the story of Elton John is due in theatres May 31

Sir Elton Hercules John CBE (Most Excellent Order of the British Empire) was born Reginald Kenneth Dwight, 25 March 1947 in London, England. Surrounded by music at an early age he learned to play on his grandmother's piano. The young Reginald could play back anything he heard including complex classical compositions. His music career started with his band 'Bluesology' but really began gaining traction when he met Bernie Taupin at Liberty Records, writing songs for people like Roger Cook a noted British songwriter and recording artist who co-wrote "Long Cool Woman (In a Black Dress)" by the Hollies. His first release as Elton John is now a very rare song "I've Been Loving You" Written entirely by Elton but he gave Bernie songwriting rights to help him establish his publishing credit. He has gone on to become the fifth best selling artist (albums) of all time with sales exceeding 250 Million. His honours include; an Academy Award, Brit Awards, Grammys, and a Tony Award among others.

Elton John, according to Secondhandsongs.com has had 107 of his original songs recorded and has covered 106 songs. All songs mentioned are written by Elton John and Bernie Taupin unless otherwise noted. Not surprisingly the most covered of his songs is "Your Song" released April 10, 1970 on the eponymous album 'Elton John'. Covered some 226 times. 'Three Dog Night" were actually the first to release the song in March of that same year. Other notable versions; from the upcoming movie Taron Egerton,  Ellie Goulding, Lady Gaga the truly remarkable Al Jarreau and Elton John & Taron Egerton (Cannes Film Festival 2019). 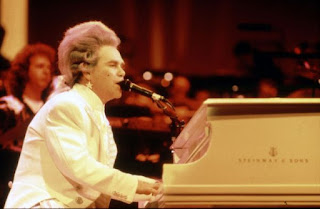 Next on the list is "Sorry Seems to Be the Hardest Word" (1976). The song hit #1 on the Easy Listening Chart and UK Singles chart and top ten around the world. Covered 106 times including; Suzy Bogguss & Chet Atkins, Joe Cocker, Ray Charles & Elton John and a voice we have all heard, you just didn't know who it was; one of the most popular international english voicemail voices and voice over artist from the 1990's and beyond, Marsha Bartenetti.

"Rocket Man (I Think It's Going to Be a Long Long Time)" has been covered at least 83 times. From the album 'Honky Château' (1972) recorded at the Château d'Hérouville. Inspired by the Ray Bradbury short story of the same name, ranked as one of the Rolling Stone Magazines 500 Greatest Songs of all Time. Versions by Kate Bush, Neil Diamond, William Shatner, Little Big Town.

Covered about 60 times is "Goodbye Yellow Brick Road" it was also recorded at the Château d'Hérouville. This was the title track from the album that was #1 on Billboard for 1973. Billy Joel, Sara Bareilles, Queens of the Stone Age and Hunter Hayes.

If you are wondering about "Can You Feel the Love Tonight?" from the movie 'The Lion King' written by Elton John and Tim Rice (1994) it was of course first released by Joseph Williams & Sally Dworsky from the movie which makes Elton's recording the second version. Covered since then over 100 times; first was a dance mix by Harajuku (1995) and this very decent Disney 'Sing-along' recording by Andrea Robinson and Arnold McCuller.