A simple enough word 'guitar' but that is where the simplicity ends. The instrument is both beautiful and complex and in the hands of the right person it can make a sound unmatched by any other instrument. Just to clarify things I can't play myself (unlike my two older brothers) and I'm no expert on the topic but I wanted to blog a bit on it regardless. So here, briefly the history of the guitar as I understand it. Firstly a definition from Dr. Michael Kasha who was a Physical Chemist and molecular spectroscopist. Apart from that impressive gig he spent many years researching and designing guitars. From a work done by Paul Guy, he quotes Dr. Kasha as saying a guitar has "a long, fretted neck, flat wooden soundboard, ribs, and a flat back, most often with in-curved sides". According to Guy the first known guitars date back about 4000 years and the oldest representation is a stone carving at Alaca Huyuk in Turkey, of a 3300 year old Hittite "guitar".


Today the modern guitar owes its existence to a Spaniard named Antonio Torres who in the 1850's designed and built essentially what you see today in most every acoustic guitar.
With the advent of steel strings over the years the designs have included stronger braces such as the X-brace from Christian Fredrich Martin. Later Orville Gibson would add the arch top and oval sound hole. With electrical amplification developed by the 1930's people like Les Paul, Leo Fender, Paul Bigsby and O.W. Appleton began constructing the solid-body guitar. Again I am no expert on this topic but we can pretty much divide the guitar into two basic modes; acoustic and electric. Each having a number of variations in construction, number of strings and playing styles.

I have mentioned I'm a fan of Acoustic and for that matter Electric Fingerstyle Guitar and have provided some links to some youtube videos. There is a great Canadian artist named Don Ross that I had the opportunity to see recently, though he has a wealth of great original material here is a clip of him covering a song you may be familiar with "Crazy" from Gnarls Barkley. This will give you some idea as to what this style is all about. Here is another clip from Don Ross & Andy McKee who I saw a few years back in Washington D.C. For the most part this is focused as a solo artist genre, however there are many collaborations as well as artists playing in bands around the world. This style, simply put is the plucking of the strings with one's fingers (or individual finger picks) as opposed to the Flatpicking style of using a guitar pick.

The origins of the style are as old as string instruments themselves as one played using fingers to begin with and today there are dozens of different classifications, both acoustic and electric. So whether it's the Classical Guitar with artists like John Williams or the Jazz stylings of Django Reinhardt or the electrical Chet Atkins and Jerry Reed the range is vast. 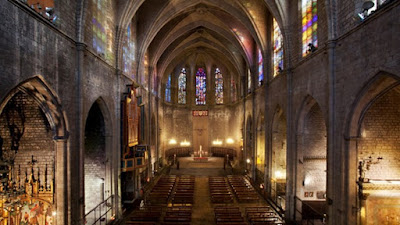 Take this brilliant performing quartet (I saw them in 2017 thanks to my eldest daughter) Barcelona 4 Guitars in the beautiful Basilica of Santa Maria del Pi in Barcelona.


Being the homer I am, apart from Don Ross, Canada is rich with talented fingerstyle players such as the late Lenny Breau, Liona Boyd, Calum Graham, Joni Mitchell, Antoine Dufour, Amy Millan (Broken Social Scene), Terri Clark and a lesson from the legend Randy Bachman with an ode to Merle Travis. His style known as 'Travis Picking' is adapted by Mark Knopfler & Chet Atkins, James Taylor , Tommy Emmanuel and many others.