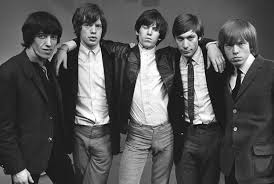 When you have released your 26th compilation album 'Honk', you know you've been around a long long time. Their 30 studio albums however does not put them anywhere near the top album producers in numbers (Brian Carroll known as 'Buckethead' has released over 300) that said it is the most impressive and unprecedented body of work. As most will know they were formed in 1962 with the basic original lineup of; Brian Jones who was the original bandleader (guitar, harmonica, keyboards), Mick Jagger (lead vocals, harmonica), Keith Richards (guitar, vocals), Bill Wyman (bass), Charlie Watts (drums), and Ian Stewart (piano). Stewart soon left but continued to play under contract for many years. Brian Jones would spiral downward due to addiction and be replaced shortly before his drowning death in 1969. Mick Taylor who replaced Jones would leave after Ronnie Wood joined in 1975. No secret the heart and soul has always been Jagger and Richards. 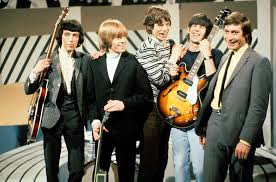 This first original song may be a surprise to some, not the song itself but the manner in which it came to be. "I Wanna Be Your Man" written predominately by Paul McCartney with John Lennon was first recorded on October 7, 1963. It was released November 1, 1963. The Beatles would record their version October 23 and release it November 22. While the accounts of how this came about vary, it essentially came to be with the two groups meeting together after an awards show. Lennon and McCartney finished the song (they were already working on) right there and then, and gave it to the Stones to record. Released as a single it hit #12 on the UK charts. The Beatles version with lead sung by Ringo Starr was not a single but released on the second UK album 'With the Beatles' and the US release of 'Meet the Beatles'. Safe to say this would be the closest the two bands would ever come.

The most covered song at over 260 versions is "(I Can't Get No) Satisfaction" which I discussed in 'The Greatest Songs'. Their next most covered song is "Paint It, Black" (1966) written by Mick Jagger and Keith Richards with 182 covers. This song prompted teenagers (like one of my older brothers) around the world  to paint their rooms among other things-black. Covered first in Dec. 1966 by the London (England) rocker Chris Farlowe, the fantastic L.A. garage band The Standells (1966). Echo & The Bunnymen (1988).

No strangers to delving into other genres particularly the blues and country. Included on this next song is fiddling legend Byron Berline and backing vocals from actress Nanette Workman, "Country Honk" written by Mick Jagger and Keith Richards. Now unless you are a serious Stones fan, which I am not, you won't recognize this song until I call it "Honky Tonk Woman". In the world of cover songs the former is the original as it was recorded first in March of 1969, although only released in November of that year on the Album 'Let it Bleed'. "Honky Tonk Women" was out months before as a single, released on July 4th, 1969. This song hit #1 or 2 on just about every chart around the world. Covered about 100 times by Ike & Tina Turner & The Ikettes (1970), Elton John (1971), Hank Williams, Jr. (1987). 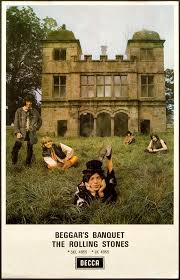 Moving down the list the next most covered song is "The Last Time" written by of course Mick and Keith (1965). Another #1 hit in the UK and top ten around the world. The Who recorded this song in 1967 and released it as a single with "Under My Thumb" on the flip side as a fundraising attempt for Mick and Keith. The pair had been arrested on drug possession charges and their buddies tried to raise money to get them out of jail, they were out before the song was actually released but hey it's the thought that counts! Other covers by the Country Music star Bobby Bare (1978), Lulu (1981), Dwight Yoakam (1997).

"Jumping Jack Flash" was released as a single in May of 1968. A complex, well written and brilliantly played song that was another #1 hit in the UK, #1 on Cash Box in the US and top ten around the world. I have to say not one of my favorite Stones tunes. In 1986 the Whoopi Goldberg film 'Jumpin' Jack Flash' used the name and she had Aretha Franklin do a cover, on which Keith Richards and Ronnie Wood played guitar with Aretha on piano. Covered about 90 times.

This next song "Ruby Tuesday" is however a favorite of mine, originally released as the 'B' side to "Let's Spend the Night Together". Because the concept of spending the night together was a bit too controversial it was marketed as a double 'A' side single in January of 1967. "Ruby Tuesday" was a nice tame song and was therefore getting more airplay and hit #1 in the US and Canada and #3 in the UK and has been covered 82 times, while 'Night' has been done 42 times. "Ruby Tuesday" by Melaine (1970), a great cover from Nazareth (1984).

"Sympathy for the Devil" was largely a Mick Jagger song inspired perhaps by his reading of a gift from then girlfriend Marianne Faithfull, a book by the French author Charles Baudelaire. While its the opening track on the Album 'Beggars Banquet' (1968) it was not released as single. Another powerful and brilliantly written song, it was the subject of some controversy as the ignorant began to associate the Stones with devil worship, I mean really... Since covered over 80 times and first by a huge star in the UK Sandie Shaw (1969). Guns n' Roses (1994) for the movie 'Interview with the Vampire'.