As in the 'Couples that Sing' post, I've mentioned some duets in past posts, specifically the number one duet according to Billboard.com, Endless Love. 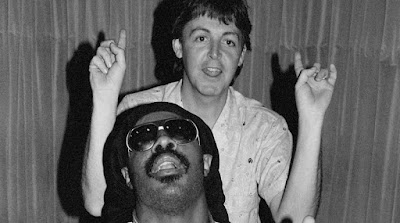 If you follow the Billboard.com list next is a song by Paul McCartney & Michael Jackson which I have chosen not to add, but here is a cover by Louis Delort & Atef Sedkaoui, 'The Voice France' in 2012. Rounding out the top five are "The Boy Is Mine" (1998) Brandy & Monica, "Ebony And Ivory" Paul McCartney once again with Stevie Wonder (1982), and "Dilemma", Nelly & Kelly Rowland (2002).

If we look at RollingStone.com from 2014 the 'duets' readers poll (list) looks like this; "Under Pressure" (1981) written by Freddie Mercury, Brian May, Roger Taylor, John Deacon and David Bowie, the duet being Freddie and David though I think the rest of Queen was in on that song as well, followed by "Stop Draggin' My Heart Around" (1981) performed by Stevie Nicks and Tom Petty, written by Petty and Mike Campbell (of Tom Petty and the Heartbreakers), Stevie Nicks again with Don Henley, “Leather and Lace”, Peter Gabriel and Kate Bush, “Don’t Give Up" (1986) and at #5 is Elton John and Kiki Dee, “Don’t Go Breaking My Heart”. All worthy contenders in a category too deep to start listing 'best of's' at all.

There are these sort of one off collaborations as mentioned above and certainly one can add to this list with legendary names such as Frank Sinatra and Liza Minnelli  "I've Got the World on a String", arrangement by Nelson Riddle, music by Harold Arlen lyrics by Ted Koehler.  A 'digital' duet of which there are many great ones out there "We Call on Him" from an album of songs Glen Campbell recorded for the ears of Elvis Presley only, Glen Campbell ‘Sings For The King’. One of my favorites is 'Genius Loves Company' the final studio album from Ray Charles, "Here We Go Again" (with Norah Jones). A pleasant surprise to me when researching this topic was the couple of Otis Redding and Carla Thomas, I was a fan of both their music and completely unaware they had recorded together. 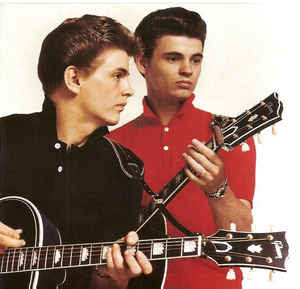 The other 'duets' are the actual groups that sing together on an ongoing basis. Or referred to as a 'duo' that being a musical or dance collaboration with or without the vocals. Top of the list here for me has to be 'The Everly Brothers' with songs like these and the heartbreaking "Ebony Eyes" this video clip includes some interesting facts about the brothers as well. I've already blogged some of the top ones such as Simon and Garfunkel, and several more throughout my blog. 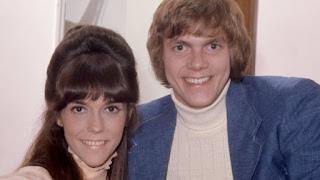 I'd be in trouble at home if I didn't mention Richard and Karen Carpenter, originally known as 'Carpenters' but since to be called 'The Carpenters'. They are a ubiquitous part of the Holiday Season with their legendary 'Christmas Portrait' album. Karen is undeniably one of the best voices ever to record, as evidenced here in a little known version of "Don't Cry for Me Argentina" (Andrew Lloyd Webber and Tim Rice). A tragic story that ended with Karen's death in 1983 at age 32. Among their many memorable hits where; "We've Only Just Begun" written by Roger Nichols and Paul Williams (1970), "Only Yesterday" written by Richard Carpenter and John Bettis (1975), "Top of the World" (1972) written by Richard Carpenter and John Bettis (1973), "(They Long to Be) Close to You" (1970) written by the legendary pair of Burt Bacharach and Hal David

Other notables include; Wham!, Soft Cell, The Black Keys, Brooks & Dunn, The Civil Wars, Eurythmics, The Weather Girls, and for some real throwbacks, Mickey & Sylvia, Sam and Dave and Inez and Charlie Foxx.