The Movie 'Yesterday' is due out in theatres on June 28th. Looks like it will be a fun movie, anything with a lot of Beatles songs has to be good. Initial reviews aren't very great but I recall Bohemian Rhapsody was in the same spot, seems it did very well at the box office and at awards shows. Though in this case 'Yesterday' is not autobiographical it is fiction, still one has to think a Beatles Soundtrack is going to do as well or better. At the very least it will remind us of how great The Beatles actually were and that songs still hold up today. The plot of the movie is based on a struggling musician being the only one who remembers 'The Beatles' existed 'yesterday' as 'today' they are absent from everyone's memory. It's a brilliant premise and poses the question, what if these songs did just come out now, how popular would they be? If nothing else it highlights the genius of 'The Beatles', the Lennon-McCartney duo and the added touches of the ever creative Sir George Martin. 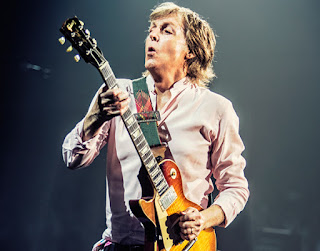 While the actual song "Yesterday" is officially credited to Lennon–McCartney (as are all the Beatles songs written by one or the other or both), but it's one of the songs written entirely by Paul McCartney. It was also the first solo performance by a Beatle, released in the UK in August of 1965, and September in the US. It featured Paul playing acoustic guitar accompanied by a String Quartet. In performances typically the backing music was run from a tape and Paul sang and played live. As with many iconic and legendary songs, there is a story behind it, I've linked a great article that gives you that story and most of what's in it I can corroborate from others sources. There are many other 'stories' attached to this song and some have some substance but most don't come from reliable sources nor from Paul McCartney or John Lennon who would emphatically state he had nothing to do with the song. If you don't have time for the article here is a quick synopsis- as Paul explains it he woke up one morning with the tune in his head, worked on the lyrics for weeks and it came to be named "Scrambled Eggs" for the 'placeholder' phrase "Scrambled eggs, how I love your legs".  A Funny clip from Jimmy Fallon and Paul McCartney. The final title and finishing touches once again came to Paul after a nights slumber. The rest as they say is history.

On the flip side of the single release was a cover of the Buck Owens song "Act Naturally" (1963) written by Johnny Russell and Voni Morrison. A rare and early opportunity to have Ringo sing lead. The songs were added to the album 'Help!' in the UK, the US version omitted both songs and ended up as the soundtrack to the movie 'Help!'.

Getting back to "Yesterday", there are credible claims that this is the most covered 'pop song' of all time, I can't verify that but my go to for expert verified covers is Secondhandsongs.com and they currently list 741 versions. This places the song at #23 for most covered song and indeed #1 for pop songs. I've seen numbers from 2,200 to over 3,000 for covers and that does not seem too far fetched to me, within 12 months of the initial release the song was covered 31 times. I've not found a list of these 3,000 or so versions but apparently Guinness World Records has an entry stating "Yesterday" is the most covered 'pop song' of all time citing 1,600 versions. Of the many notable cover versions are; the first to cover it Marianne Faithfull (1965) then the English Crooner Matt Monro (1965), The Supremes (1966), Willie Nelson (1966), Ray Charles (1966), Rosey Grier  the football player (Roosevelt Grier) in 1967, Joan Baez (1967), Frank Sinatra (1969) and fast forward to this amazing instrumental version from Christian Sands (2018).


If you like my blog, please consider filling in the follow by email link at the top right hand of the page. Remember to confirm the subscription when you get the first email. Confidentiality is assured unless you are a close friend or family member then all bets are off. While I can compile data from my blog it's not tracking in terms of anyone's identity. For past blog posts click on the menu at the top right corner. Pass it along to a friend who might enjoy it as well or post it to your timeline on FB. And many thanks as always for reading my blog.