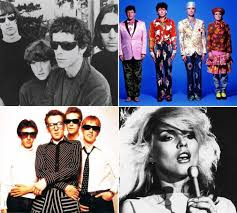 was a period of music during the late 70's to the early eighties and identified as a departure from the Punk Rock scene. It developed into a more diverse 'grass roots' pop oriented if you will, music that became much more commercially viable. So named from the "La Nouvelle Vague" (New Wave) cinema from France that was instrumental in turning movie making away from the more traditional approach.

New wave was not a genre as artists from all over with different types and styles of music began getting lumped in together. There were many artists that came from Punk music roots to transition into more mainstream production, I've mentioned a few in past posts but to me the best example is The Clash. Firmly rooted in Punk Rock since 1974 its collective members formed one of the leading bands to come out of the UK at that time. They are important to the 'New Wave' movement with their 1979 album 'London Calling' and the title track "London Calling". Referred to as  'post-punk', as Punk rock popularity took a serious slide in 1977/78. As evidence the line in the song "Phoney Beatlemania has bitten the dust" might reflect the Clashes realization that the Punk glory days were over.  So to me the Clash moving to more mainstream but still 'edgy' music was just a bridge to the 'New Wave' sound.  Chrissie Hynde and the Pretenders (so named from the Platters song "The Great Pretender") is also a great example. Her transition from Punk started with the single "Stop Your Sobbing" (1979) which was a great adaptation of the Kinks song from 1964. This song was produced by Nick Lowe who was an early influencer in new wave.

Rarely do new developments in music trends happen in isolation, nor do they happen because everyone sat around a table (no Skype or Facetime back then) and said "hey let's make some new wave music". As always there are a few exceptions if I understand the whole 'boy-band' thing but I'm getting off track.

So, elsewhere there were other new and exciting artists making 'waves' with their sound as well and not all of it top 40 hits either. Elvis Costello (btw Nick Lowe produced his first four albums, co-produced the fifth and is still making new music himself) whose roots are in the British 'Pub Rock' scene came out with songs like "Alison" (1977). A great cover from Linda Ronstadt. It was a bit of an underground movement and certainly within my circle or friends with artists like Costello, as at the time this song did not chart at all but is ranked at #318 of the 500 Greatest Songs by Rolling Stone (2014). Also from Costello "Watching the Detectives" (1978). The Ohio based band Devo made a splash in 1977 with "Mongoloid". Other early influencers were Blondie with the great "One Way or Another" released in 1979 from the 1978 Album 'Parallel Lines', and The Cars with their second album 'Candy O' and "Let's Go" (1979).

With some electro synth-pop came The Human League with the initially commercial unsuccessful but never the less influential "Empire State Human"
(1979) and Gary Numan "Metal" (1979) both with heavy German techno-pop influences. 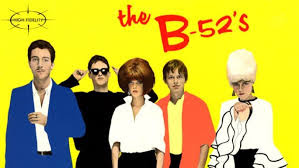 The Georgia based B-52's "Rock Lobster" (1978) was a huge party hit with the College and University crowd. Joe Jackson's debut effort with songs like "Is She Really Going Out with Him?" (1978) placed him firmly in the mix after it's re-release in July 1979 became a hit. Inspired by co-writer Doug Fieger's girlfriend, the real 'Sharona' Alperin (who posed for the pic on the album sleeve) "My Sharona" (1979) from the Knack. The Police had a huge hit with "Roxanne" on their debut album 'Outlandos d'Amour' (1978). The Squeeze started to gain notice in 1979 with "Cool for Cats" from their second album. I know I've missed several but you get the general idea.

A few of these artists would go on to successful careers in the 1980's and well beyond, but in the early days they paved the way for these artists: